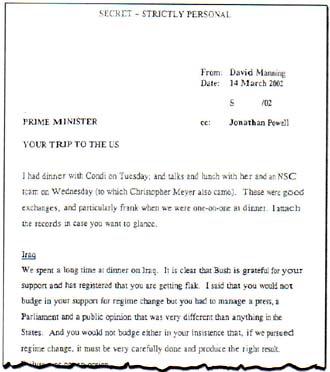 PRIME MINISTER
YOUR TRIP TO THE US

I had dinner with Condi on Tuesday; and talks and lunch with her and an NSC team on Wednesday (to which Christopher Meyer also came). These were good exchanges, and particularly frank when we were one-on-one at dinner. I attach the records in case you want to glance.

We spent a long time at dinner on IRAQ. It is clear that Bush is grateful for your support and has registered that you are getting flak. I said that you would not budge in your support for regime change but you had to manage a press, a Parliament and a public opinion that was very different than anything in the States. And you would not budge either in your insistence that, if we pursued regime change, it must be very carefully done and produce the right result. Failure was not an option.

Condi's enthusiasm for regime change is undimmed. But there were some signs, since we last spoke, of greater awareness of the practical difficulties and political risks. (See the attached piece by Seymour Hersh which Christopher Meyer says gives a pretty accurate picture of the uncertain state of the debate in Washington.)

From what she said, Bush has yet to find the answers to the big questions:

Bush will want to pick your brains. He will also want to hear whether he can expect coalition support. I told Condi that we realised that the Administration could go it alone if it chose. But if it wanted company, it would have to take account of the concerns of its potential coalition partners. In particular:

YOUR VISIT TO THE RANCH

No doubt we need to keep a sense of perspective. But my talks with Condi convinced me that Bush wants to hear your views on Iraq before taking decisions. He also wants your support. He is still smarting from the comments by other European leaders on his Iraq policy.

This gives you real influence: on the public relations strategy; on the UN and weapons inspections; and on US planning for any military campaign. This could be critically important. I think there is a real risk that the Administration underestimates the difficulties. They may agree that failure isn't an option, but this does not mean that they will avoid it.

Will the Sunni majority really respond to an uprising led by Kurds and Shias? Will Americans really put in enough ground troops to do the job if the Kurdish/Shi'ite stratagem fails? Even if they do will they be willing to take the sort of casualties that the Republican Guard may inflict on them if it turns out to be an urban war, and Iraqi troops don't conveniently collapse in a heap as Richard Perle and others confidently predict? They need to answer these and other tough questions, in a more convincing way than they have so far before concluding that they can do the business.

The talks at the ranch will also give you the chance to push Bush on the Middle East. The Iraq factor means that there may never be a better opportunity to get this Administration to give sustained attention to reviving the MEPP [Middle-East Peace Plan].